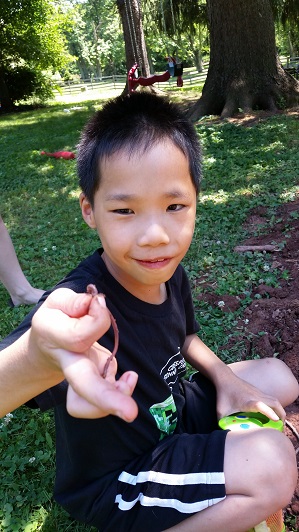 I had the honor of spending the day with Shane this week.  His host Mom dropped him off with me, and he was happy to dive into my toy room with my two boys.  The language of ˜child,’ specifically ˜boy,’ is universal.  From Legos, to dinosaurs, to robots, to swords, these three boys had no problems communicating!  But we had to pause the playtime for a bit so that I could take Shane to the Audiologist.

One of Shane’s special needs is atresia of the left ear.  A wonderfully sweet Audiologist donated his time and services to help us learn more about this need, and how it affects Shane.  Shane willingly waltzed into the Doctor’s office, and charmed everyone he saw.  Upon entering the testing room, Shane looked a little reluctant when we motioned that he should go in the little room.  Shane went in anyway, and with a little coaxing, and me holding his hand, he relaxed.  I did my best to translate through an app, œraise your hand when you hear beeps.  No one was sure if the translation went through.  But we thought, well, we’ll find out!  The Doctor began the testing, and almost immediately Shane’s hand shoots up into the air while he mimics (rather, screams along with) the beeps.  That answers that question¦.he knows what he needs to do!

The Doctor was blown away with Shane’s cooperation.  We won’t tell his other patients, but he may or may not have said Shane was his easiest that day!  The Doctor did a slew of hearing tests on both sides.  He was able to determine that Shane’s right ear hears perfectly!  And, he was able to confirm that Shane does in fact have some inner ear hearing in his left side, and might be a good candidate for a bone conduction hearing aid!  This was all wonderful news.

After our appointment, Shane joined me for lunch.  He was a perfect date.  While he munched on his hamburger (of course he got a hamburger¦.he LOVES hamburgers, and can say it quite clearly in English), he was enthralled with the touch screen game system on the table.  He picked up on how to play the games immediately, and we both giggled while he played. 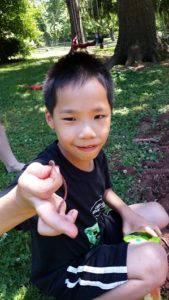 Boys will be boys….Shane loved digging for worms!

Having a blast jumping in the moon bounce! 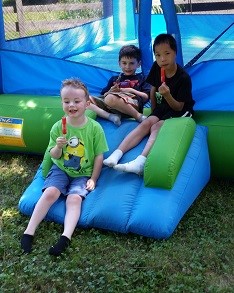 Enjoying a cold popsicle on a hot summer day

Then it was back to my house to play with my boys for the afternoon.  Shane got right back into the toys, and was overjoyed to pet the dog.  After a while, we headed into the yard to burn off some steam.  Shane immediately went for the baseball and bat, and connected on pitch #1!  We had the moon bounce set up, and he wasn’t too sure about it.  Though, the instant he saw my boys jumping with glee, he dove in! Pure joy! The smile on this boy’s face was contagious.  His innocent joy¦palpable.  He spun and jumped and tumbled until he was dripping with sweat.  A quick popsicle cool down, then it was time to go.

From spending the day with Shane, I was struck by his pleasant and polite nature, and his insistence on always helping me.  I wasn’t to open or close a single door¦.he was in charge of that.  I was also struck by his easy-going attitude.  I must admit, I was a bit intimidated at the thought of having to manage an 8-year-old boy, who doesn’t speak English, for the day.  Would he run?  Would be listen to me?  Would he understand anything that I was wanting him to do?  Well, those fears were beyond unnecessary, as Shane made it so easy!  He was a joy to be with, and will be such a blessing to the family that adopts him.

Shane is currently being hosted in Pennsylvania through Madison Adoption Associates for four weeks this summer, enjoying himself while we try our hardest to find his forever family.  Please email sarah@madisonadoption.org for more information on this spectacular boy!