We talk about and to our wonderful Moms a lot.  We don’t often talk of our Dads.  But that doesn’t mean they are any less worthy.  Our Dads are heroes.  And in honor of Father’s Day, we chatted with Carl Bramble, father to four, two of whom were adopted from China.

Did you always envision that you would adopt?  If not, when did it become a possibility?

I never expected or even thought about adoption until I met my wife Diana.  I always expected that I would get married and have probably two children (hopefully a boy and a girl).  I met Diana at the Italian Festival one summer night and fell in love with her instantly.  Even though I had only talked with her for about ten minutes, I called my Mother the next day to inform her that I had met the woman I was going to marry.  As I got to know Diana better, I learned that she had two adopted brothers, and that her mother was the director of an adoption agency.  I very quickly learned that marrying her meant that I would be adopting.  I accepted it, but it seemed like a very distant thing at the time.  Within a couple of years, we had a biological son, and 2 years later, a biological daughter.  This fit my vision of what I had always wanted, and I questioned Diana if we really needed to adopt any children.  Of course, the answer was yes, we do need to adopt.  I didn’t put up much of a fight because I knew that was the deal all along.  At the time, I thought I was satisfied having 2 biological children.  But now, after adopting another boy and then a girl, I can’t imagine how life would be without all 4 of my children. It has been absolutely amazing and more fulfilling than I ever imagined. 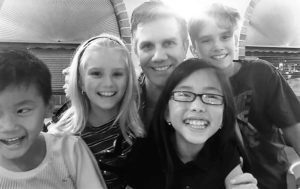 What was the scariest thing for you, as a Dad, going into adoption?

My biological son Charlie is the one who first said Chase belonged in our family.  As we looked through files of children waiting to be adopted, Charlie (who was around 5 or 6 years old at the time) kept saying that we need to adopt this little boy with the missing left hand.  By that time, it was obvious that Charlie was a very gifted athlete.  To give you some idea, since then Charlie has broken records in swimming, played on all-star baseball teams, and has played on high level ice hockey travel teams.  I spent a lot of time with Charlie, allowing him a lot of opportunities in athletics, and it was a major way to bond with him.  I just couldn’t see how this little boy with a missing left hand was going to be able to fit in with this lifestyle.  However, Charlie did not give up.  He would point at the boy’s picture on a daily basis and tell me that this was his brother.  I resisted this for quite some time.  It took me months to finally go along with it.  One day as I sat down to read the Sunday paper, the front page had an article about a local boy who was missing his left hand.  The article showed all of the activities that this boy was involved in, including rock-climbing, swimming, baseball, etc.  That was the day I decided we should move ahead with adopting the little boy with the missing left hand.  Wow, was Charlie right.  This little boy (our Chase) is one of the most amazing kids I’ve ever met.  And, he turned out to be VERY athletic also. 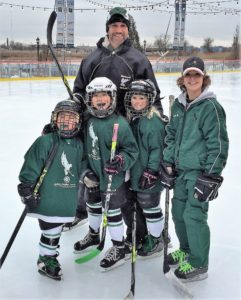 He plays ice hockey just like his big brother, and no one can even tell that he’s doing all of his stickhandling with one hand.  He’s also on the swim team, and plays baseball.  In fact, just today I received an email that Chase was selected to play in the Naamans Little League Single A all-star invitational!   Chase’s baseball hero is Jim Abbott, who was also born with only one hand, and went on to pitch a no-hitter with the New York Yankees.  My fears were completely unfounded, and I’m so thankful that my biological son Charlie was so persistent in convincing me that this was his little brother.

What is your greatest hope for your kids?

Like all parents, we want our children to be successful.  But we don’t push them in any certain direction.  We try to give them every opportunity to find out what they are good at, and find their passions.  Most of all, we want them to live happy lives, and do their part to make the world a better place.  We want them to be kind and generous.  Already several of our children are talking about adopting their own children one day.  When I’m older, I would love to be surrounded by grandchildren and be able to be involved in their lives.

What is the best part about being a Dad?

I love being a dad.  It’s the most fulfilling thing in my life.  Every child is different, with their own personality and passions.  These are things that make them unique and even a parent can’t change them.  But a child can’t reach their potential without being given opportunities to find out what drives them.  When you give your child an opportunity, and they are successful and discover a passion, it’s really fulfilling.  Watching them succeed at something, and seeing the joy and smiles when they accomplish something, it really fills you with pride.

Are there any differences between parenting your adopted kids versus your biological kids?

To be honest, I initially thought it would be different.  We had our 2 biological children first before adopting.  I loved them so much that it didn’t seem possible that I could ever love adopted children in the same way.  Of course, it takes some time, but my love for my adopted children grew rapidly.  At this point, I honestly can say that I love them all the same.  All of our children are truly amazing, and I feel the same pride in each of them.  Beyond this, there were some initial challenges with the adopted children.  For example, we adopted Allie at age five and a half, and she did not speak a word of English.  But, it’s phenomenal how quickly she learned. After about 3 weeks home, we put her into school.  There were some initial struggles, but yesterday she came home with a trophy and certificate for being the “Best Reader” and having earned the most “Accelerated Reader” points in the entire 4th grade at her school.  What an accomplishment for a girl who could not speak a word of English just three and a half years ago!  And, Chase, our one-handed wonder, was treated like a king by the caretakers at his orphanage.  This was probably due to his infectious smile and personality.  So, when he initially came home to us at age 19 months, he was actually very angry.  He didn’t like being taken away from everything he knew, and he was probably a bit spoiled as well. There was an adjustment period of a few months that were rough.  But he came to understand how much we loved him, and began to love his new siblings, and he turned into a super happy kid.   So, beyond this period of initial adjustment, there is really no difference now in parenting the adopted kids versus the biological kids.

Tell us your funniest Dad story.

Maybe it was the time when the kids ran inside and excitedly asked if we are growing pizzas in the garden.  I was confused but agreed to follow them out to the garden to see why they could be asking this question.  They pointed to a plant, and I informed them that it was basil.  Each of our plants had a little white tag in the ground next to them in order to identify the type of plant.  They pulled the tag out of the ground to show me and asked me to look closer.  Indeed, there was a small picture of a pizza with many vegetable toppings on the bottom of the tag. I had to regretfully inform the children that we were not growing pizzas, only some vegetables that could be used as toppings on pizza.  They were disappointed, but we all had a good laugh about that one.

What advice do you have for first time Dads, and first time adoptive Dads?

It’s going to change your life.  You’re going to need to put the needs of your children and family ahead of your own.  Give your child every opportunity you can think of.  Raise them to be kind and generous and humble.  Your feelings, especially about your adopted children, may take some time to develop.  During that time, I would say to fake it ’til you make it.  But you will definitely make it, and your love will grow enormously.   There will be some tough times.    There are going to be some long and exhausting days.  But you’re going to be repaid many times over.

Some more of our incredible Dads…. 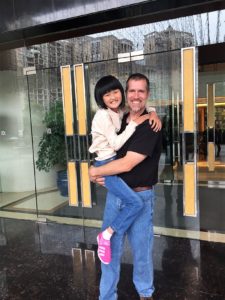 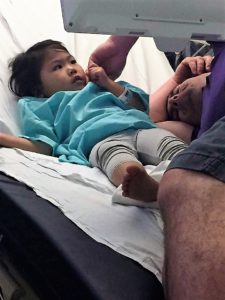 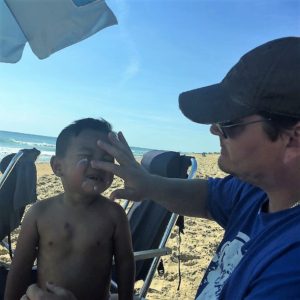 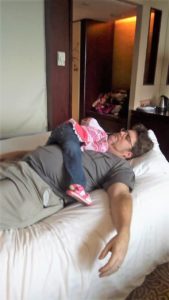 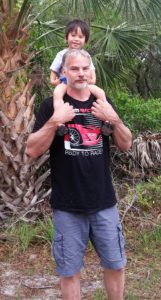 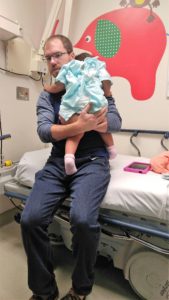 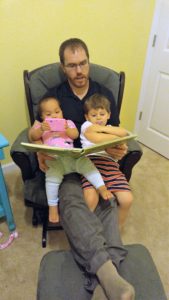 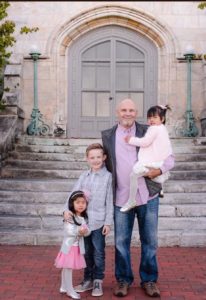 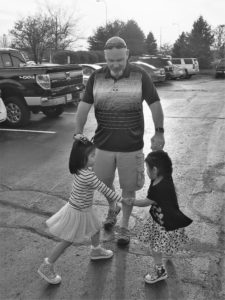