From Adoption Professional to Adoptive Mom 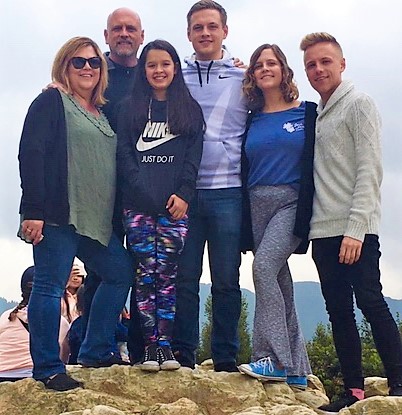 What lead you to decide to host a child from Colombia? My husband and I have always had a passion for children, and in helping them to mature and be the best they can be whether through coaching, teaching, mentoring, and now Hosting.  As you hear about children who do not have families you want to help, and we felt that the best way for us to help was to advocate.  However, we quickly discovered that we needed to do more to share Angie’s story.  Hosting allowed us to be proactive and directly involved in advocating for her and finding her forever family.  We were a family of five, and only had one child still at home.  So we decided as a family that the we wanted to do more for Angie, and that meant hosting her.  We also knew it would be fun to share our culture with her and learn more about her culture!

What was your motivation to host?  Our motivation initially was to become active and diligent in finding Angie a forever family.  However, as we fell more in love with her and her personality, our motivation shifted to the possibility of adopting her.  While we knew our desires to adopt her, we also realized that we wanted to be sure she understood everything that adoption meant for her – did she understand and enjoy US culture?  Did she thoroughly understand that she would be leaving her birth country?  Did she want to be adopted?  We wanted to adopt her, as did our three children!  But we wanted to be sure that is what she wanted too.

What were you and your family most excited about when it came to hosting?  Most nervous about? As a family, we were excited about being given the opportunity to expose Angie to new experiences.  Experiences such as sitting around the table and telling stories to each other, playing the Wii until late at night, staying in a hotel, learning to bowl, participating in vacation bible school, allowing her to pick out her own shoes and clothes, getting hugs, late night dances in the kitchen, making cookies, learning to eat peanut butter and sliced apples, having a birthday party just for her, being a part of a family that had no expectations of her.  The greatest fear for me personally was cooking food she would like.  I am not a cook, and am always self-conscious about what I cook.  She is a picky eater.  Our food is nothing like Colombian food and the recipes don’t translate well. (I still don’t cook food she likes, but we are learning and adjusting.)

Tell us about those 3 weeks…  The first week was wonderful!  She was excited to see us at the airport!  She was compliant, and we were all on our best behavior.  Our adult children came home, and Angie was entertained every second of the day.  It was great!  Then the second week came along, and life got busy with work for Jack and me.  Our teenage daughter was working as well, and it wasn’t always fun.  She was a trooper through it all.  We had told her the very first day that she was with us that she was allowed to tell us what she was feeling and would not get in trouble.  She would tell us when she didn’t like something and would tell us when she was bored.  We would adjust as needed.  She learned to trust us some during that second week as she quickly learned that things didn’t always go as planned, but that we kept our word from whatever we told her.  The third week was different, as Angie wanted to stay home.  She didn’t want to go and do things, but just wanted to be at home.  She expressed that she loved her room.  She also would ask to play games with the whole family.  About two days before it was time for Angie to leave, we noticed that she started distancing herself.  She was not as happy and would pull away if we hugged her.  She even became mean in how she picked on our teenage daughter.  The night before she left to go back to Colombia, she came and asked me to brush her hair and then asked my daughter to paint her fingernails.  (Not things that this very independent child had done before.)  The morning that she left, she got caught up in talking to her friends and barely gave us hugs when she left.  This hurt as we wanted her to want to be with us.  The reality is that she did want to be with us but was afraid of being hurt so she distanced herself.  When she got back to Colombia, she talked about us and showed people her photo album of her family.

What lead you to consider adopting your host child?  Was there a big ‘ah-ha’ moment? It really is a God story.  Being passionate about advocating for Angie and feeling drawn to her.  I was already in LOVE like only a mother can be.  My husband said, “let’s host her and take the opportunity to get her in front of her forever family.  We will pray daily and allow God to lead us to her forever family.” We agreed to do this and within two days, my husband came into the bedroom that morning and said, “we are going to adopt her, if she wants to be adopted.”  He said that as he was getting ready and praying, he looked in the bathroom mirror and God basically said, ‘why are asking me for a father for her when I have already given her you.’

On a side note, 12 years ago I asked my husband if we could adopt.  He said no. I said I want a baby or a dog.  Thinking there was no way he would let me have a dog! (This was in the fall, probably about the same time that Angie was born.)  On Mother’s Day, I got a dog.  My dog is 12 years old and Angie loves her.   Angie is 12 years old.  My heart was led to adoption 12 years ago in preparation for Angie.  Jacks heart was changed to move towards adoption when we decided to host.

What was the most challenging part of the adoption process?  For us the most challenging part of the adoption process was the waiting!  I was ready to bring her home as soon as hosting was over, however, we had to wait for Colombia to process our dossier and make our match.  And then Angie was going back and forth on whether or not she wanted to be adopted.   She had even refused to skype with us for a period of time.  We waited for about 6 weeks while she participated in counseling and the orphanage staff worked with her to see when we would be able to come for her.  Jack and I did a lot of praying.  We finally found peace within ourselves by acknowledging that her past and her experiences are not rooted in trust, especially trust of adults.  We realized that we just need to be there for her.  To be present if/when she needed us.  We even told Colombia that we would do what they felt was best for Angie.  If that meant that we did not get to adopt her then we would adjust and figure out how to show our love and support for her from afar.  She was our daughter in our hearts, and we always wanted to be there for her, even if it meant not living in the same home.  About a week later, Angie began telling her staff and peers that her family was coming to get her on a specific day and that she had the best family. She had chosen us!  And we were reunited with her this past January.  This time, forever.

As a therapist and professional in social services, I know that she had to figure out what was best for her and what she wanted for this to all work out like it has, but man was that HARD on a momma!

As an adoption professional turned adoptive Mom, what were the most eye-opening parts for you? The paperwork is crazy!  Why does one have to be fingerprinted three times for a Colombian adoption?!  Adoption literally is a step of faith as you expose every aspect of your life to strangers in your state, country, and Colombia in hopes that they will say you are good enough to adopt a child.

How has going through the process yourself affected your work with prospective adoptive parents? Going through this process has made me more aware of the knowledge adoptive parents need to have about trauma and about raising a child who has not lived in your home since birth.  Adoption is hard!  The process is hard!  Having patience for other people to make decisions on your behalf is hard!  Disappointments are hard! Raising a child who has not lived in your home since birth is hard!  Life will never be as it was before, but rather we have the opportunity to take this adventure as a family, not a family of five, but now as a family of six.  Professionally, I had the knowledge of how trauma affects children and how adoption impacts the family dynamics, but living it is a completely different reality.  Reality is that we are six individuals who chose to be a family and we deserve to be given dignity and love.  We cannot expect one another to be the same.  If we live with the reality of who we are then this journey as a family will be easier.  We are Lucas Family of six!!!  We will support each other through every step of life.

Anything else you would like to share?  Just some of my thoughts as I reflect on the current place we are at.  Some children want to leave what they have always known.  Others want to hold on to it and reject what is new.  We as parents have to figure out how to balance that.  In our home we have told Angie that we want her to learn English and use it at school when she can.  At home she can continue to speak in Spanish until she is ready to use it all the time.  This is something she can control.  We also have befriended other adoptive families from Colombia, some who have adopted her friends and some who adopted other children.  We allow her to skype and communicate with friends from Colombia.  We don’t ever want her to feel like we are taking her away from the culture and people she has always known.  There again it is not about doing what is comfortable, but about adjusting to our new normal.

Thank you Misty, for sharing your amazing story with us! To learn more about hosting, or about adoption, please visit our website.