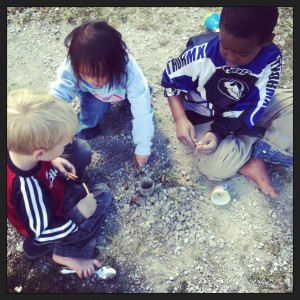 A nice woman was introducing my family to someone she knew.

“This is Katie.”, she said. I smiled and offered my hand. The kids were like little squirrels at my feet.

“This one”, she said pointing at my middle son, “this one is hers.”

The little place in my gut that still tightens when I know what is coming next started to tug my smile away.,  “And, she adopted these two.”

Her intention were nothing but kind. She adores my little family. Did I mention the she I am referring to is over ninety years old, and she even went over and put her arm around my oldest son and said so lovingly, “I just love this boy.”,  She loves the boy that was adopted., ,  I am grateful because I love him too. He is amazing, and what, a pleasure it is as a parent when you know that someone else can delight in your children.

Still I went home thinking about those words, with no anger or frustration at her.,  Because her intention was love. I think intention is important. I think we can not overlook it and jump to anger.

As we walked back to the car I tried to decide to bring it up or not to the kids. Had they heard? Did it sink into their minds?,  Honestly, they had not been paying attention.,  In fact if I remember correctly the boys were playing Batman verses Hulk all the while their sister jumped silly over their wrestling bodies.,  So, I squeezed them and kissed those heads and told them they were so loved. We walked on.

The middle one, he is mine. I mean I birthed him, and he has my eyes. The marks on my stomach are evidence of those nine months being stretched.

But, what about the other two. The ones that I did not carry.,  Was that not the point?

Is not part of adoption to take a child that has been removed from the security and rhythm of belonging and bring them back into the fold of a family?

They did belong. They once were someone’s. Even if it was just for that nine months they grew so strong and perfectly , inside the womb of their birthmothers. That was belonging.

And, then something happened.

And, it was awful. Because it is awful when, a child goes from what is familiar to what is so very lonely.

Being let go is lonely.

Being surrendered is lonely.

Being dropped off at a gate in front of an orphanage is lonely.

Becoming an orphan means losing all sense of belonging.

Yes. The middle one is mine.,  Stretch,  marks.

But, so is the eldest. He is mine because we became family on paper, a contract of governments,, , much like a marriage, a covenant of Momma and Daddy and son.

And, so is the youngest. She is mine because I singed my name to those documents and I waited the months and I navigated the process in order to proclaim that she very much so belonged once more.

For these, the two I do not have stretch marks as evidence, I sat at a tattoo parlor and endured the point of a needle.,  Now all three of them have left their marks on Mom.

But, since the day I said yes I know what I have been.

Unquestioningly.,  Unwavering.,  I have been theirs.

Adoption can take a child that has lost the most precious love he has ever known, and give him once again a precious love.

Adoption is the seal of belonging.

Three kids. Three continents. You should see my stretch marks.

(Tonight, my heart is so full of emotion and thought and prayer for this family. They are not an MAA family, but I read their story and I can not let it go.,  I am linking here to the blog: Because of Love so that you have an opportunity to share in the love that this family has for their son, Cruz, who died before he was able to come home from Ethiopia this week. He died before coming home, but he did not die an orphan. This is a powerful story, and I hope you can reach out to this family with love and support.)