I woke up to the falling snow, school cancelled, and two boys begging me to go out and play in the winter wonderland with them. 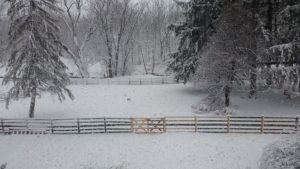 I was able to put them off for a couple of hours while the gusts died down, but I knew it was inevitable.  So then there I was, spending the half an hour suiting them up with four layers each, and giving myself a pep talk to put my own snow boots on, and my smile, to allow them this rite of passage.  I don’t like the snow.  I don’t like being cold.  And I don’t like when the wind slaps you across the face.  I’ll be the first to admit it.  But it’s amazing how those feelings (mostly) dissipate as I see the utter joy in my children’s faces.

We built the wonkiest snowman ever.  Then we played ˜bury and find his nose’ (the carrot) for a good hour.  And of course, the snowball throwing was in full force.  There were laughs.  There were tears (the four year old took one right in the face¦..it happens).  And there was innocent fun.

Back inside we go, and they are now thawing out with hot cocoa in front of the fire, as I sit to write a post about Bentley. 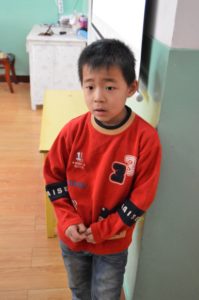 I pulled up his file and pictures to help me think about what I wanted to share with you about him.  I noticed he is from northern China.  And once again, my mind goes where it often does.  Comparing the children I fight hard for, like Bentley, with my own.  I wondered if Bentley likes the snow.  I wondered if he has ever really been taught how to play in it.  I wondered if he would prefer sledding or snowball fights.  He loves sports, so I’m guessing he’d enjoy both!  I wondered if he would like hot cocoa when he came inside.  And if he would like it with the colorful marshmallows or the white ones.  And if he’s a cookie dunker or not.  I continued to wonder about Bentley as I heard the final slurps of my boys finishing their cocoa, and starting to beg to bake the cookies I promised them we would.

Bentley, just like all children, so deserve to experience childhood joy and wonder like a no-school snow day.  He deserves a Mom who doesn’t like the snow, but goes out anyway for her kids.  He deserves siblings to throw snowballs at.  He deserves to bake cookies and fight over licking the spoon.  He deserves a childhood.

Bentley is available for adoption through Madison Adoption Associates.  He just turned 10 and is diagnosed with post-operative Spina Bifida.  There is a $3,000 grant available to the family who steps forward to adopt Bentley.  Email Sarah@madisonadoption.org for more information.